After 6 difficult years, Servette Football Club has reconquered the right to top flight football in Switzerland. A 3-1 win on home ground against Bellinzona in the return leg of the playoffs gave them a 3-2 advantage on aggregate, and thus sees them promoted at the expense of what was the only swiss italian side in the Swiss top championship. The youthful group of grenats thoroughly deserved their qualification after making most of the play in the 1st half and creating numerous chances in play. Crazy emotional scenes ensued following the final whistle, including a total pitch invasion as well as a full stadium lap for the club president, the Iranian businessman Pishyar. Followed by hordes of youths and saluted by all, the President who has thus silenced his critics for some time. This team, made up mostly of fairly young players, has more room to grow. Let’s hope that they’re now in it for the long run. Aux armes!!! 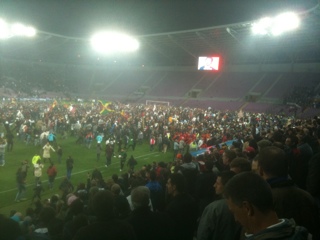