Unlike some of his other EPL contemporaries who are helping themselves to hat-tricks while on tour in far away “exotic” locations, Fernando’s draught is apparently not over. But I think we have identified the cause (probably linked to an obsession developed while under hypnosis in the Benitez boot camp): someone should put an end to his moonlighting on Wii Fit and get him to practice more on the ball.

That might also help Chelsea avoid turning into a bit of an Arsenal and signing on truckloads of untested promising youts who will have to be offloaded to teams like Stoke, Bolton and Newcastle the following season.

Scoring (in the men’s)

While visiting the Centre de la Vallée de la Jeunesse in Lausanne yesterday with the kids (by the way, excellent interactive exhibition on the brain, for all my readers with offspring to entertain), I couldn’t help but notice the following interesting accessory in the men’s (literally). Though this amusing addition to an otherwise perfunctory task could be seen as adding another dimension to the legendary self-professed exploits of Humpty Hump in BK’s facilities, please let there be no scandalous confusion when I say that I scored.

Lots of opportunities for scoring

As if responding to the barrage of criticism (including from the AJB) following their miserable ousting from the Champions League at the hands of Man U (see previous post), the Blues seem to be on the mend with a couple of strong performances in the EPL. To ice the cake, even Fernando has finally managed to break his cherry for the Blues in front of the ecstatic home faithful on Saturday. What could be the explanation for this apparently impossible turnaround, which now sees the Blues in 2nd place and still within reach of the reds? Carlo’s usual touchline expression of mild bemusement and bewilderment, will not provide any clues. A clue might be found in the following pieces of information: 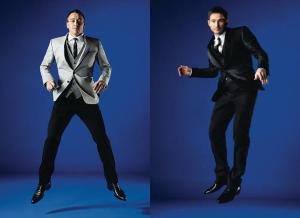 Iconic fashion with a strong look?

Many (and notably WSC, who brought these to our attention), did not know what to make of these fruitylicious photos of Chelsea’s senior players. Though Chelsea’s official match programme begged to disagree, indeed both John Terry and Frank Lampard do look ridiculous; unforgiving sports critics might even also point out that it’s been a while that they’ve seen Lampard jump that high on the pitch. Apparently commissioned for an issue of GQ and organized with the club’s official taylor Dolce & Gabbana (aren’t you glad to know that they actually have an official club taylor), certainly these are highly suggestive of a dolce vita lifestyle, but then again this should be no surprise to anybody.

A priviledged moment with Terry

However, upon discovering LeShop’s new paper bag design, a potential new and unexpected explanation dawns. Love gives you wings, according to the  popular saying or something along those lines. And as we realised (thanks to Google translate) that “Endlich mehr Zeit zum Herumtollen mit Terry” means “At last more time to fool around with Terry”, suddenly that pathetic CL elimination takes on a whole new light. Now all that is missing is a George Michael tribute to the Blues lovebirds.