Despite appearances to the contrary, having a family and a social agenda means that important milestones will sometimes be missed, so hopefully all 3 of my blog readers will forgive me for not posting anything on the last 4 games. I promise to catch it up over the next two game days. However, AJB is back tonight for a riveting Ukraine-Sweden game that is promising to be a firecracker!!! Sorry, forgot to turn off the Sky Sports / BBC hype pump, that wasn’t me talking.

C.R.E.A.M. – clowns rule everything around me.

It is interesting to observe how far the co-opting, and at the same time, the sanitisation and the numbing of fans’ passion has gone, and that corporations now feel quite unabashed in offering up their definition of what being a fan is about in full public view. Gone are the classic images of footballers fooling around with the ball in airports or just kicking it around in the stadium. The central theme running through one of the tournament’s main sponsors campaign (a company known for its various electronic products) is that what constitutes “the most dedicated fan” seems mainly linked to ability to dress silly and heavily going in for face painting. Never mind keeping up a positive attitude when things are not going well, or attending far away games in Eastern Europe surrounded by unfriendly cops. But commitments of that type do not make for media-friendly images that can be used to create that diffuse but sufficiently bland warm feeling that gives sponsors the sense of purpose in funding such nonsense.

Old/mean man kudos: At 35, Andriy Shevchenko is Ukraine’s most senior and undoubtedly most illustrious player, having starred at AC Milan and then, erm, Chelsea. Notwithstanding that, despite looking as if he has just managed to grow his first beard, Bayern’s Anatoliy Tymoshchuk is another credible contender at 33. Otherwise, all of Ukraine’s players are really nice guys in touch with their sensitive side.

French connection: This is another stretch: former Lyon defender Pape Diakhaté, currently with Spanish club Grenada FC, officially spent 4 seasons at Dynamo Kiev from 2007 to 2011 (although he was loaned out for 2 of them). That should be amply sufficient to get him invited to the late evening piss-up on M6 that passes for a football discussion show, to offer his views on “what it’s like over there”. There might be a last dash attempt for pre-retirement heroics for Sheva, especially after that lovely flying header and if the new owners at PSG fail to land a current big name like Ibrahimovic or Tevez.

The more stupid, the better. This one is courtesy of a soft drinks company.

New hype kid most touted to join the English Premier League: 22-year old Andrei Yarmolenko is not exactly a household name just yet (as such transfer targets quickly become), but has managed to get himself noticed during Kiev’s recent Champions League outings. With a total of 12 goals (to 28 appearances) for club last season, and another 4 (out of 7) for country, he could be the new big thing for the right club. With Bili the Kid at Everton, blue would perhaps be a good destination for him, unless Arsène decides he can’t afford Dzagoev but wants to add to list of his alternative signings from Eastern Europea. Otherwise, on the left wing, Yevhen Konoplyanka was equally if not more impressive throughout the evening, showing lots of technical skills and courage to take on opponents directly. 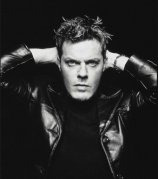 Hollywood factor: Am I the only one to have noticed the striking resemblance between Sunderland’s Sebastien Larsson and comedy stand up “executive drag” star Eddie Izzard? I wonder who’s better at the other one’s skills – Larsson with the jokes, or Izzard with the ball?

Old/mean man kudos: In addition to Sweden, 34-year old Olof Mellberg has played in Spain, England, Italy and now Greece, for the last 3 years (at Olympiakos)! If that isn’t proof of a big heart, I don’t know what is.

French connection: Unlike for the Ukranians and many other nations covered so far, the Swedes seem to quite like playing in France. Goalkeeper Andreas Isaksson spent two years at Rennes from 2004 to 2006, Kim Källström has been at Lyon forever, while Johan Elmander got Europe to take notice while at Toulouse, from 2006 to 2008; a bit sadly for him, only Bolton was watching.

New hype kid most touted to join the English Premier League: at lot has been said of midfielder Rasmus Elm, currently serving at AZ Alkmaar and with 10 goals to his name this season. At 24, he might be a ripe for a new challenge.

Historic moment of the match: The dramatic and emotionally loaded hug between Andriy Shevchenko and the grumpy old Oleg Blokhin following the former’s 2nd goal – they indulged in another one at the end of the game.

Hero of the game: Shevchenko, for that beautiful 1st headed goal, created from nearly nothing, and for confounding his critics (including this scribe) by deciding the game with the 2nd (and getting one over Ibrahimovic in the process).

Galliani was there too, to show support & dedication for his Swedish darling.

After this convincing display, albeit against an opposition that is more intimidating in terms historical achievements than present might on the pitch, Russia will certainly climb up in most specialists’ and especially tourists’ rankings as potential favorites. It’s always so with wins with significant goal margins. But to be fair, they did show good command of the ball and potency in attack, so it is actually not unfair for them to inherit the status of favorites to qualify from this group. A quick review of their essential features as per this tournament’s key assessment criteria.

Hollywood factor: Igor Denisov would be a great Russian baddie sidekick in a James Bond flick, but the problem is that the Russians have slipped down the bad guys’ pecking order.

Old/mean man kudos: With the singular exception of the youthful Dzagoev, the average age of the starting 11 is probably somewhere around 29 if not even 30, so there are many contenders for this role. Defender Aleksandr Anyukov looks the meanest though (see photo below).

French connection: There have not been many Russian players in Ligue 1. This is kind of surprising given the many lavish and luxurious facets of life in France. The low appeal of the hexagon may have to do with the high taxes, the absence of Russian owners, or simply the general lack of all round bling-bling status, though that may be changing rapidly as PSG prepares for another big splash this summer. But honestly, I don’t even feel like googling the players’ names, I am that unconvinced of finding anything (help is welcome as always).

New hype kid most touted to join the English Premier League: Alan Dzagoev – the very prospect of being able to lean on the simplicity of his first name for buddy-buddy post match interviews (for UK journos) places him above many on the shopping list for an early summer deal, not to mention his two great goals of the evening. If Roman doesn’t bite, don’t put it past Wenger to break the piggy bank (and try to definitely dispose of Arshavin in the process) for another promising quick-footed midfielder.

Hollywood factor: Although already 31, Arsenal’s own Tomáš Rosický conserves a youthful insouciance that is quite endearing (for example his haircut suggests he is no more than 15 years old). If Arnold Schwarzenegger is ever tempted for a reprise in his classic role, for example in Terminator 5, I would recommend Rosický to play alongside the former guvna as an older version of John Connor (that other kid in Terminator 3 was completely out of his depth). But really, let’s face it, it’s all gone terribly wrong since Jan Koller retired from national service. (copyrighted pun by prince O of Subfoot.com fame) 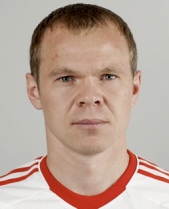 Mean man in defence, Aleksandr Anyukov; the Czechs no longer have one like him. Where is Tomas Ujfalusi anyway?

Old/mean man kudos: High of his Champions League performance, it should be Cech but that soft fuzzy helmet is suggestive of a lingering fragility not suited to the big boots that come with this responsibility. Though not exactly old at 26, Petr Jiráček’s has a potential bad boy/rock star look that put him in contention for this role (as well as a move to AS Roma). However, overall the boys in white are light on this key factor especially prized by Roy Keane, so they won’t be his favorites to make it through the next round.

New hype kid most touted to join the English Premier League: On a serious note, the young 23-year old Václav Pilař, who impressed with Viktoria Plzen in this year’s Champions League group stages, and elegantly converted the only Czech goal of the evening, could be a good buy for someone with a slightly longer term vision then the average EPL chairman. I bet David Moyes could make him fit in well at Everton. 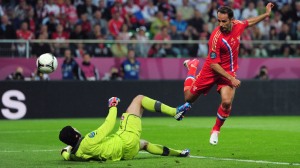 Roman chips over Cech for the 2nd goal of the night.

Hero of the game: Alan Dzagoev, and notably for his convincing 2nd goal and passionate but classic celebration.

Harry Redknapp’s quip of the game: He’s good that Roman Pavlyuchenko guy, we should try to buy him for next season.