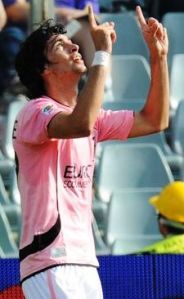 Javier Pastore (not to be confused for a big pussy i.e. the Sopranos-famous Vincent Pastore)

It’s all over in Italy as Milan have sealed their title win thanks to yet another clean sheet in Rome. Despite a rather insipid 0-0, the additional point was sufficient for Silvio’s crew to finally reconnect with some domestic success after many years of frustration. Congratulations might have been on the cards but after hearing about Gattuso’s rather lowly comments towards Leonardo the mood here just isn’t very sporty. Inter on the other hand dispatched relatively easily with Fiorentina despite breaking some cold sweat in the second half after Fiorentina pulled one back but youngster Coutinho’s first goal in nerazzurro (a fine curling yet sharp free kick à la Wesley) restored the 2 goal lead that Inter had confidently acquired in the 1st half. Lucio thought he would add spice and freak the fans out with a careless ball loss that brought the best out of Julio Cesar towards the end but the game (view highlights) finished on 3-1, thereby helping to reduce Milan’s lead to 6 points. The win and the renewed confidence (so good to see El Muro back on the bench), combined with that declaration, now means that we will be sharpening the knives in the hope to meet the red & black once again in the Cup final for a revenge opportunity, but in the meantime tomorrow’s official colour is pink: forza Palermo, we’re counting on you Pastore.

Napoli in the meantime lost away to resilient Lecce (see great 2nd collective goal punctuated by a superb strike by ex-Sevillano Chevanton here) and thus their gap with Inter has now widened to 4 points. On paper this would probably mean that the fight in San Paolo next Saturday against Inter would be quite bitter, but as things seem to be souring by the minute between the coach Mazzarri and his president Dino de Laurentis, perhaps the motivation won’t be as strong since in addition the azzurris are fairly strongly positioned in 3rd place and will furthermore missing their talismanic goalscorer Cavani, red-carded during this game. A fierce battle for fourth place is now on between Lazio, Udinese and Juventus (who again managed to draw tonight at home to Chievo).

In England in the meantime, Man U’s 2-1 win against Chelsea (view highlights) has given Fergie’s team the decisive 6-point lead that pretty much seals the title race. Mathematically the Red Devils can still drop the ball if they lose both of their last 2 games and Chelsea somehow cruise through both of theirs and end up with a better goal average (they would have to achieve a 3 goal improvement on Man U in these 2 games), thereby stealing the title on the basis of the latter. However the probability of that happening is fairly low at this point considering as well the two games that the teams have to play and the moral advantage that Man U have through this win over the current champions, as evidenced by the celebrations at the end. Arsenal in the meantime have failed to capitalise on the Blues’ defeat in losing 3-1 to Stoke City at the Britannia, as the “rugby team” (as they were affectionately dubbed by the Gunners’ faithful) coached by Tony Pulis put themselves in an excellent mindset for next Saturday’s FA Cup final against fourth placed Manchester City. The light blues lost away to Everton despite starting strongly as late goals from Distin and Osman keep them pegged in fourth position with an apparently very strong resurgent Liverpool challenging for theirs and Spurs’ European passes. The relegation battle also promises to go down to the wire as things remain very tight at the bottom.

Elsewhere, anti-José fans should note yet another defensive outing by the blancos as they humiliated Sevilla by a mere 6-2 away at the Ramón Sánchez-Pizjuán. That’s only 12 goals in the last3 games but it’s probably still too defensive for most. Barça in the meantime drubbed local rivals Espanyol with a defensively reckless 0-2 win.

In France, Lille’s bid for the title regained credibility through a tough but determined win away at Nancy on Saturday, and was further reinforced by Lyon’s emphatic win at the Gerland against 2nd placed Marseille (see video highlights here). Good to see Cris being decisive again and regaining some authority in the club. PSG will be delighted of course, although the Lyon win puts them back in fourth place as they only managed a point against a Monaco side that has finally begun to find some form. Rennes, who were previously competing for 1st place, have fallen off the rails and will be fortunate to finish 5th considering the strong performances from France’s most attractive side (by joga bonito standards, but actually they very creative) Sochaux, who again confirmed their potential with powerful win against Bordeaux (see highlights here) that has finished off Tigana’s mandate.

In the Bundesliga, Borussia Dortmund missed the chance to seal the title through defeat at Werder Breme but it’s now probably just a matter of 1 or 2 games. In the meantime, Bayern comforted themselves (for their miserable season, by the club’s lofty standards) with a 8-1 win over relegation bound St. Pauli.

P.S. thanks to Prince O for highlighting both Chevanton’s goal and Gattuso’s outburst.